Fast, accurate and secure technology and apps that will streamline your AGMs and elections. Launched in 2001 as Meeting Express, Lumi’s AGM service is an interactive system 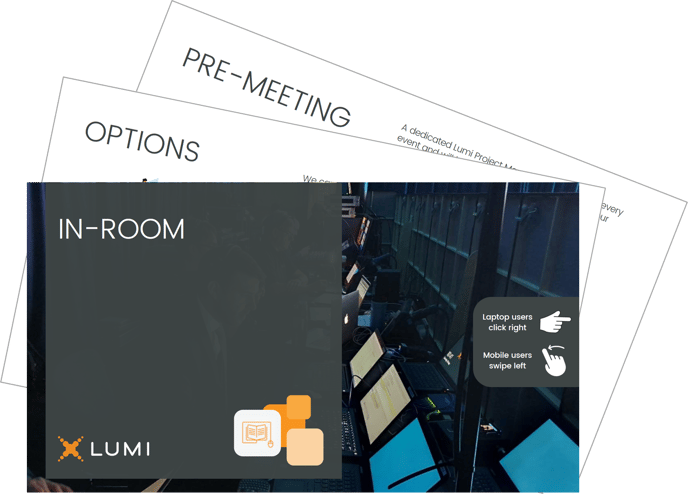 offering clients a fast and accurate solution to poll votes alongside a comprehensive automated registration process that links meeting attendees with their voting rights.

Through this electronic voting system each shareholder is given an individualised ID, poll card or smartcard. The smartcard can be inserted into an IML Connector or IML Communicator keypad to cast a vote. At the close of voting, the system calculates all live and proxy votes in seconds, and the results are displayed on screen (and other devices) immediately at the AGM.

Attend - Corporate representatives, proxies, joint holders, guests and press are registered and their details are added to the meeting database. The registration process for each attendee can be completed in a matter of seconds.

Monitor - The vote monitor keeps track of information on the number of attendees and the votes they have available. It also calculates a best and worst case scenario for each resolution based on the votes on the ﬂoor.

Vote - With the smartcard inserted into the handset, the shareholder votes on resolutions. Unlike a show of hands, or a poll card the vote is instantly recorded. A message on the handset screen conﬁrms that a vote has been cast.

Talk - Each handset contains a microphone. Attendees press a button to join a queue that can be viewed by the chairman. Microphones are activated and deactivated by the technician, the shareholder can then ask their question without having to move to a microphone port.

Results - Results are displayed instantly on screen. The results screen can be fully conﬁgured to reﬂect your company’s branding. A variety of display options exist including total results, votes in the room and votes cast as if by a show of hands.
​​​

Reports - Reports are produced automatically, including the poll and ASX letters. Attendance lists, a report on votes by each attendee and details of any votes that have been revoked from or fallen to the chairman facilitate audit processes.

In The Room vs Hybrid vs Virtual

Lifecycle of an AGM

What are the Benefits of Using Electronic Voting at my Meeting?

How Does the Lumi Keypad Device Work?

Is it the end for in-room shareholder meetings?

What is Kiosk Voting?

How to use Lumi's Kiosk Voting solution

How to use Lumi's Self Registration solution

The Advantages of Electronic Voting

Reviewed and Approved by Global Support 16/01/23